Japan is currently in the midst of a fintech boom brought on by the rapid onset of changes in digital payment, development of cryptocurrency and the 2017 amendments made to the Banking Act.

The Ministry of Economy, Trade and Industry has created a wide range of policy initiatives aimed at nurturing innovative fintech companies and services in Japan. The Tokyo Metropolitan Government also launched the ‘FinTech Business Camp Tokyo’ in 2017 aimed at encouraging foreign firms to join Japan’s central financial market. Moreover, in an attempt to combat Japan’s renowned cash based society the government has set a target to double the amount of cashless transactions from just under 20% to 40% by 2025.

Amendments made to the Banking Act in 2017 will certainly improve the government’s chances of reaching this goal. Focusing on the development of technology in finance the amendments make it easier for banks to collaborate with Third Party Providers (TPP), giving access to their accounts and data. Less than a year after the amendments, Japanese banks submitted draft policies on ‘open-banking’ which would let them open their application programming interfaces (APIs) to fintech firms for services such as investment management and digital payments. As of spring 2018 12 banks have succeeded in opening their APIs with another 80 to follow over the next two years.

The opening of API’s has created a large opportunity for both domestic and international firms. The Australian and American founders of Japanese start-up Moneytree saw this opportunity, and created an app which allows users to get an overview of their finances from multiple institutions and sources on one screen. Along with the normal bank accounts, payment details and credit cards Moneytree allows users to register loyalty cards, a feature tailored to the Japanese market. In the early years of development Moneytree struggled to find approval from the banking sector as many feared giving up sensitive customer data. However after winning Apple’s App of the year 2013, and with encouragement from banking reforms, Japanese banks recognized the security and value this TTP partnership could add value to their customer’s experience.

These radical changes in the often conservative industry of financial services, show Japan’s willingness to become an innovator of fintech. One of the most visible changes to be seen over the next few years will be in digital payment. Though contactless payment is well established in Japan thanks to the likes of Suica, Pasmo and other domestic travel turned e-money cards, many wonder how Japan will cope with the influx of Olympic tourists hovering their Visa’s over outdated swipe and sign card readers.

You’ll be pleased to know that though the often monopolizing apple pay has diffused across Japan, there are several fintech companies still making a name for themselves in this ripe market. PayPay, one of the newest contenders in digital payment sees the alliance of SoftBank, Yahoo! Japan Corporation and Indian financial services company Paytm. PayPay combines AI and QR codes in a smartphone payment app. The cooperation of these data giants will allow PayPay to be distributed across the companies’ combined customer base of 40 million accounts.

In other digital payments, UK fintech is having a strong impact on the Japanese remittance market with Transferwise growing, and British firm Azimo receiving a $20 million investment from Rakuten.

Along with innovations in digital payment, Japan is striding through the world of cryptocurrencies. Japan is the global leader in the market development of cryptocurrencies, with over 50% of Bitcoin being accounted for in yen. In April 2017 the government reformed the Payment Services Act to protect cryptocurrency users by ensuring that all cryptocurrency exchanges are registered. Despite this reform use of cryptocurrency remains tentative thanks to two shocking robberies both pre and post regulation. In 2014 $450 million in Bitcoin was stolen from Mt.Gox, headquartered in Shibuya, in an event which sent shockwaves through the cryptocurrency world. The more recent 2018 robbery was equally scandalous as USD $534 million worth of the cryptocurrency NEM was stolen from Coincheck. At the time of the hack, Coincheck was already four months past its registration deadline, but was allowed to continue operating while it waited for the Financial Services Agency’s approval. Some have argued that the incidents expose deeper flaws in Japan’s approach to cybersecurity, pointing to the lack of expertise held by Japanese Chief Information Officers and Chief Security Officers as a particular weakness.

Despite these highly publicized heists, investment into cryptocurrency continues. Former Goldman Sachs investment banker and creator of Monex, Oki Matsumoto, bought the unsettled Coincheck Inc in April 2018. He has publicly reaffirmed his belief that the future of financial services lies in cryptocurrencies, and that after stabilization they will become a cornerstone of our daily lives. In Japan cryptocurrency usage is weighted towards speculative investments, rather than digital payment. However, as of 2018 more than 260,000 retailers are able to accept cryptocurrency nationwide, with big names including electronic mega-stores Bic Camera and Yamada Denki. In 2017 the number of cryptocurrency users reached 3.5 million, with transactions through the five most popular virtual currencies totaling ¥69 trillion. Thanks to Japan’s rigorous legal system and regulation of cryptocurrency trade we could be seeing Olympic spectators using cryptocurrency’s to avoid international charges. 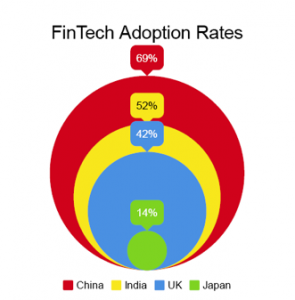 According to the 2017 EY Fintech Adoption Index, Japan’s overall fintech adoption rate was around 14%. When compared with the UK’s 42%, and the global average of 33%, we can understand Japan’s use of fintech is sluggish. The Index considers five key categories; money transfer and payments, financial planning, savings and investments, borrowing, and insurance. Surveys are then conducted to analyse the populations’ access and utilization of fintech services. Despite Japan’s low adoption of fintech we expect these figures to bloom during the run-up to the Tokyo 2020 Olympics thanks to progressive regulations.

Japan’s fintech market is establishing itself as high-paced and attractive, both domestic and international fintech firms are finding their feet in each of the key categories as the market expands. For those firms hoping to fill the gaps in the current market it’s worth checking out Japan’s largest annual fintech summit Fin/Sum. This summit connects global finance and tech companies promoting innovation. The 2018 Fin/Sum is focusing on digital banks, consumer payments and cryptocurrency in Asia. The summit is partnered with major Japanese banks and tech firms, supported by the Japanese Cabinet Office and the UK Foreign Office. British companies are in a particularly favorable position as the FCA and JFSA both agreed on a cooperative framework to support Fintech between the UK and Japan. Thanks to UK innovation there is a healthy bilateral referral system for fintech firms.